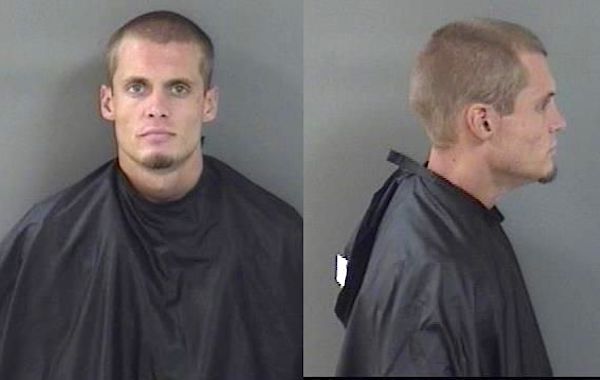 MICCO – A 24-year-old man was arrested on Felony Auto Burglary charges after deputies say he tried to steal a vehicle in Vero Lake Estates.

The incident took place Wednesday morning at approximately 5:00 a.m. when a homeowner, at the 7000 block of 96th Court in Vero Lake Estates, called the Indian River County Sheriff’s Office to report a burglary in progress.

Two people in the home told deputies that they heard someone talking outside and made contact with the suspect, later identified as Paul Preston Nilsen, standing next to their blue Ford Mustang.

A few minutes later, as the homeowner was on the phone with 911 dispatch, Nilsen began to walk away. He was chased by the homeowner down 96th Court in Vero Lake Estates before losing sight of Nilsen. During the chase, Nilsen dropped his cell phone.

The homeowner also said he observed a vehicle parked on 79th Street as if waiting to pick someone up. The vehicle left before deputies arrived.

Two hours later, deputies found Nilsen. When asked where he was around 5:00 a.m., Nilsen stated he did not know.

“Nilsen stated he blacked out and ended up being in a blue vehicle. Nilsen stated that he did not plan on taking anything out of the vehicle or take the vehicle,” the deputy said.

When deputies showed him a cell phone recovered at the scene, Nilsen acknowledged that it was his phone.

Nilsen, who’s residence is listed in Micco, was charged with Felony Auto Burglary “with the intent to commit an offense.” He was transported to the Indian River County Jail where bond was set at $3,500.