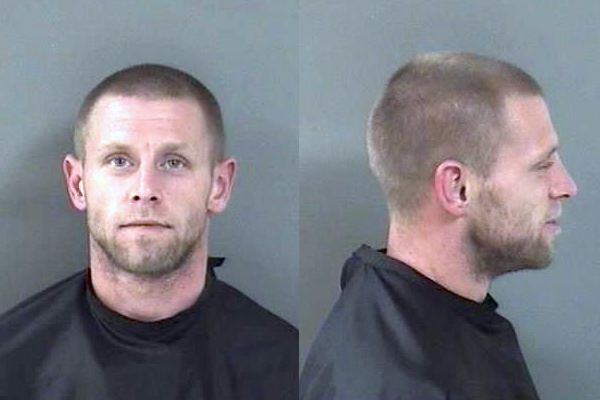 A Vero Beach man drove his truck into the front door of his girlfriend's home. (Photo by Indian River County Sheriff's Office)

VERO BEACH – A 30-year-old man was arrested after he struck his girlfriend’s car and the front door of her home with his truck, according to the Indian River County Sheriff’s Office.

Joseph Ellerry Townsend, of Vero Beach, was arrested on a charge of Felony Aggravated Assult, Driving with a Suspended Driver’s License, and Criminal Mischief.

Deputies received a call about a reckless driver at the 1300 block of 16th Avenue SW. They spotted the truck spinning its rear tries on the dirt road and fishtailing the truck until it turned around to head north on 16th Avenue.

There was also a call from the victim at a residence on 16th Avenue who said she was almost run over by the truck.

A neighbor told law enforcement that Townsend and his girlfriend argue all the time. She heard a truck revving its engine, so she went outside to find out what was going on.

Once outside, she saw Townsend trying to run his girlfriend over with his truck, the report said.

Deputies then made contact with the girlfriend. She said they were arguing on the way home from the beach and Townsend was driving recklessly.

She asked Townsend to pull over and let her out, but he continued to drive.

“Townsend began to drive faster and more reckless while threatening to drive the truck into a tree at a high rate of speed,” the deputy said.

Once they arrived home, the girlfriend ran in and locked the door. Townsend began driving recklessly and collided his truck with his girlfriend’s vehicle, according to the report.

The girlfriend ran outside to try and stop him, but Townsend reversed and started driving towards the victim.

The victim then ran back into the home and that’s when Townsend crashed the truck into the front door.

Townsend then broke some windows and crawled into the home. While inside, he started throwing objects around in the kitchen, the arrest affidavit said.

Deputies asked Townsend his side of the story, but he replied, “I’m going to jail, so f— it. It is what it is.”

Townsend was transported to the Indian River County Jail. Bond set at $18,000.00.

While driving away from the scene in the patrol vehicle, Townsend looked over at his girlfriend and said, “F—ing cu–t.”

Pedestrian Killed By Car On 12th Street In Vero Beach