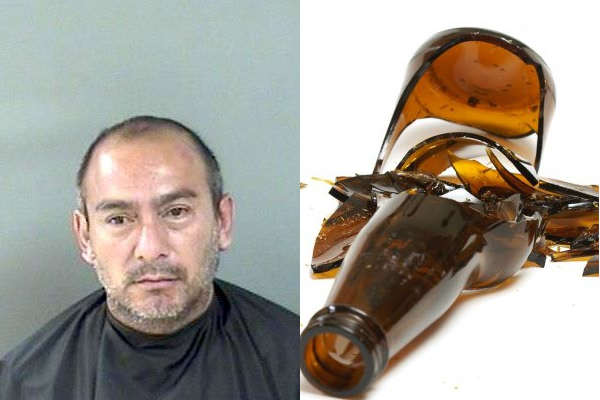 VERO BEACH – Earlier this morning, the Vero Beach Police Department received a call about a man throwing beer bottles at the 1800 block of 40th Avenue.

Upon arrival, officers made contact with one of the callers who stated there was a shirtless “short bald” Hispanic man who lived in the apartment in Vero Beach next to him throwing beer bottles and subsequently hitting vehicles with them.

“[the caller] stated that he confronted the man about throwing the bottles at which time the man raised a bottle towards him,” the officer said.

As the man was getting ready to throw the beer bottle at the caller, his brother intervened.

“While walking the area I noticed approximately 8 broken Bug Light beer bottles in between vehicles and in the street,” the report said.

Officers made contact with the suspect, identified as 46-year-old Juan Martinez Fonseca, who appeared to be intoxicated.

There were more broken beer bottles found in the courtyard of the apartment complex where Fonseca was sitting.

“I asked about throwing the beer bottles in the air, which Fonseca didn’t seem to care about,” the officer said.

Vero Beach Police officers then made contact with a victim, the owner of a 2003 Mitsubishi, which had damage that was consistent with being struck with a beer bottle.

There was damage to the front and rear passenger fender of the car, as well as the roof. Approximate damage was estimated to be $500.

Fonseca was arrested and transported to the Indian River County Jail where he was charged with Disorderly Intoxication, and Criminal Mischief.

Sebastian Man: "Officer, I haven't had a license in 20 years"