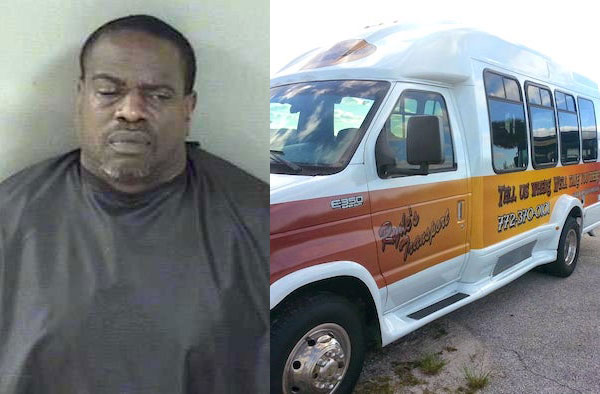 VERO BEACH – A bus driver for Ryde’s Transport was arrested Wednesday in Vero Beach after he was in a physical altercation with one of his passengers, according to the Indian River County Sheriff’s Office.

Earl Kincaid Hall, 49, told deputies that the bus transports children from the Kids and Nurses facility in Vero Beach. Hall stated that while he was transporting three children with disabilities, one of his passengers began yelling and cursing at him because he made a wrong turn.

The driver then pulled the bus over and approached the unruly passenger. Hall stated that the passenger punched him in the eye, according to the arrest affidavit.

The passenger, identified as Latifah Maranda Sneed, told deputies that Hall missed one of the stop locations. Sneed is employed by Kids and Nurses.

She said Hall was in a bad mood ever since she got on the bus. Sneed said the two began to yell on the bus until Hall became so angry that he pulled the bus into a church parking lot at 2600 58th Avenue in Vero Beach.

Sneed said Hall then walked up to her and punched her in the jaw, and that’s when she punched him back, the report said.

“The fight was physical from the center of the bus until they made their way to the front of the bus, fighting the whole way,” the deputy said.

A child on the bus called out to Sneed, and that caused her to cease the fight with Hall. She went to comfort the child when the bus driver allegedly walked up and punched her with a closed fist to the left eye, according to the report.

“I observed minor swelling to Hall’s right eye. Sneed’s left eye was swollen shut and was the approximate size of a golf ball,” the deputy said in the report.

Hall was arrested for battery and transported to the Indian River County Jail.