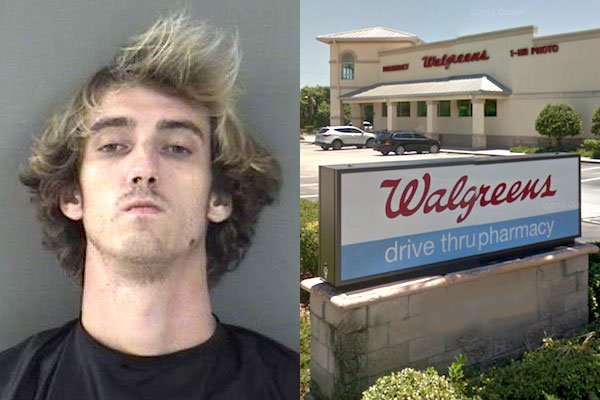 Man tries to buy Oxycodone using a fraudulent prescription at a Walgreens in Sebastian.

SEBASTIAN – For the second time in less than a week, another person has been arrested for trying to buy Oxycodone using a fraudulent prescription at a Walgreens in Sebastian.

The suspect dropped off the prescription at the store located at the corner of U.S. Highway 1 and Barber Street.

Upon inspecting the prescription, the store pharmacist noticed it was for Oxycodone 30 mg from the medical office of Dr. Harish Sadhwani in Sebastian.

Dr. Sadhwani told the Walgreens pharmacist that he is unaware of how the suspect obtained the prescription.

Police then found the suspect, identified as 26-year-old Blake James Brawner, standing at the counter waiting to pick up the Oxycodone.

Brawner refused to answer any questions from police and was placed under arrest for Attempting to Obtain a Controlled Substance by Fraud.

On the way to the Indian River County Jail, Brawner told the officer “he was fu**ed” because he was out on bond from a previous arrest.

Five days ago, another individual tried to pass a fraudulent prescription at a Sebastian Walgreens store for Oxycodone. It was also from the same Dr. Harish Sadhwani.