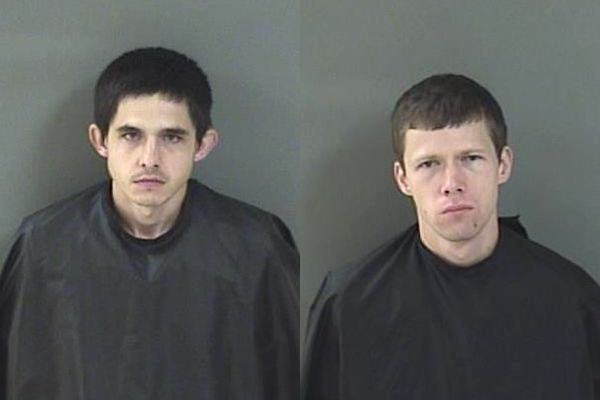 SEBASTIAN – Two people were arrested Tuesday morning for trying to steal Samsung Galaxy tablets and a Lenovo tablet at the Sebastian Walmart, according to the Sebastian Police Department.

Brandon Lee O’Neal, 34, and Kyle Jameson Hairston, 34, hid the computer devices inside a cooler while in the self-checkout lane.

The two men, both from Palm Bay, were also observed stealing motor oil from the store on a separate incident that occurred a week prior. The Walmart asset protection associate recognized the two from the previous theft that was recorded on video surveillance.

As O’Neal and Hairston went to the self-checkout, they only rang up the cooler containing the $14.97 price tag with the computer tablets inside the cooler with the lid shut.

“The two paid for the cooler and left the store passing all points of sale without making any attempt to pay for the tablets that were placed inside the cooler,” the officer said.

O’Neal and Hairston both admitted to removing the computer tablets and hiding them in the cooler. They also admitted to switching the price tag.

Both men were charged with Felony Grand Theft with bond set at $7,000. As of Saturday morning, the two men are is still being held at the Indian River County Jail.