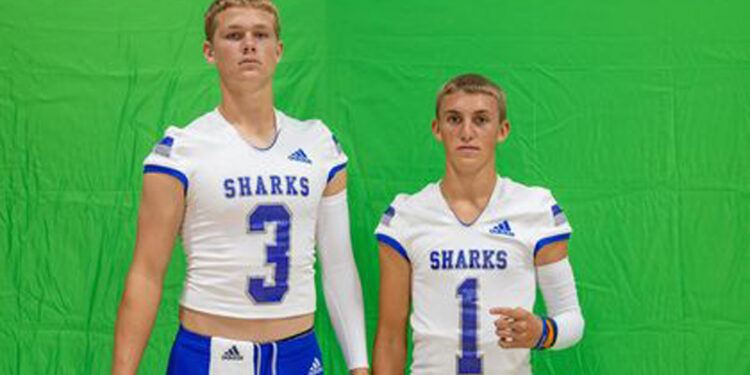 The Sebastian River High School Shark’s Varsity Football team will be traveling to Austin-Tindall Sports Complex in Orlando for their first official game on Thursday, August 25th; kickoff will be at 6:00 pm.

They will play against the Golden High School Demons, who traveled from Golden, Colorado.

Senior Christopher Harris is a quarterback, tight end, and safety with a 4.4 GPA. His football goals for this year include 2000 passing yards, 700 rushing yards, and bringing back a winning culture at Sebastian Football.

“The coaches and team provide a family away from home that I can trust and come to with anything. I really appreciate all the coaches, especially the head Coach. Coach Perry is always there for us and works hard to bring the best out of each of us,” Harris told Sebastian Daily.

Outside of football, he enjoys fishing and coaching at the local youth league (SSYFCA). Christopher currently has an offer at Graceland University. He plans to major in engineering.

Gavin Ford is a senior who has been playing football since he was 6-years-old. His goals for the year include getting an athletic scholarship and raising his GPA from 3.8 to 4.0.

In college, Gavin plans to study sports medicine. Outside of SRHS football, he enjoys volunteering and coaching at the youth league.

“The coaches and team are like a second family to me; they’ll be the first ones to support me and back me up. We grow and learn from each other,” said Ford.

It is Tyrone Perry’s fourth season as head coach and 28th season coaching at the school. He’s had a proven track record with

back-to-back winning seasons. Perry teaches Exceptional Student Education (Autism) and Physical Education at the school when he isn’t on the field.

For tickets to any of the Sebastian River High School Football Games, visit Ticket Spicket.