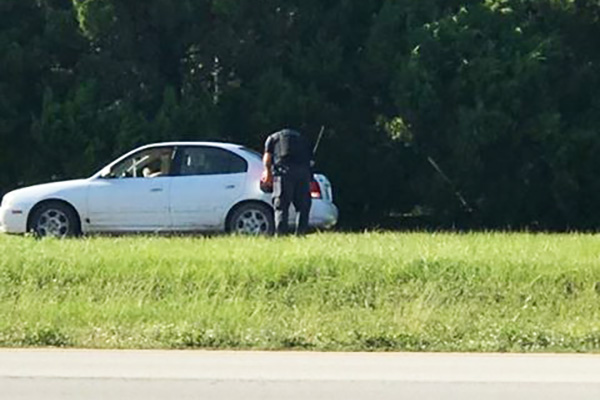 On Monday, we published a photo on our Facebook page showing a police officer helping a stranded motorist on Sebastian Boulevard (CR-512) near Barber Street.

Since then, several people wanted to know what happened. We asked the Sebastian Police Department for the name of the officer who went above and beyond the call of duty.

Officer Ryan Matthews told Sebastian Daily that he observed a woman in a vehicle trying to flag down the traffic. Matthews then made contact with the driver and learned that she was on her way home from an appointment when she ran out of gas.

The woman told Matthews that she did not have a phone, nor did she have any immediate family that could help her at that time. The driver then advised that she was disabled, and she did not know how she could get home.

“After learning this, I went to Cumberland Farms and purchased a gas can and gas and responded back to the female and filled her car up with the gas. She stated she only had three dollars and tried to give me the money, which I refused and advised her to drive to the gas station and put another gallon of gas in her car,” Matthews told Sebastian Daily.

Matthews then gave the woman the gas can and made sure her car cranked. He then assisted getting her back on the roadway, and she drove home.