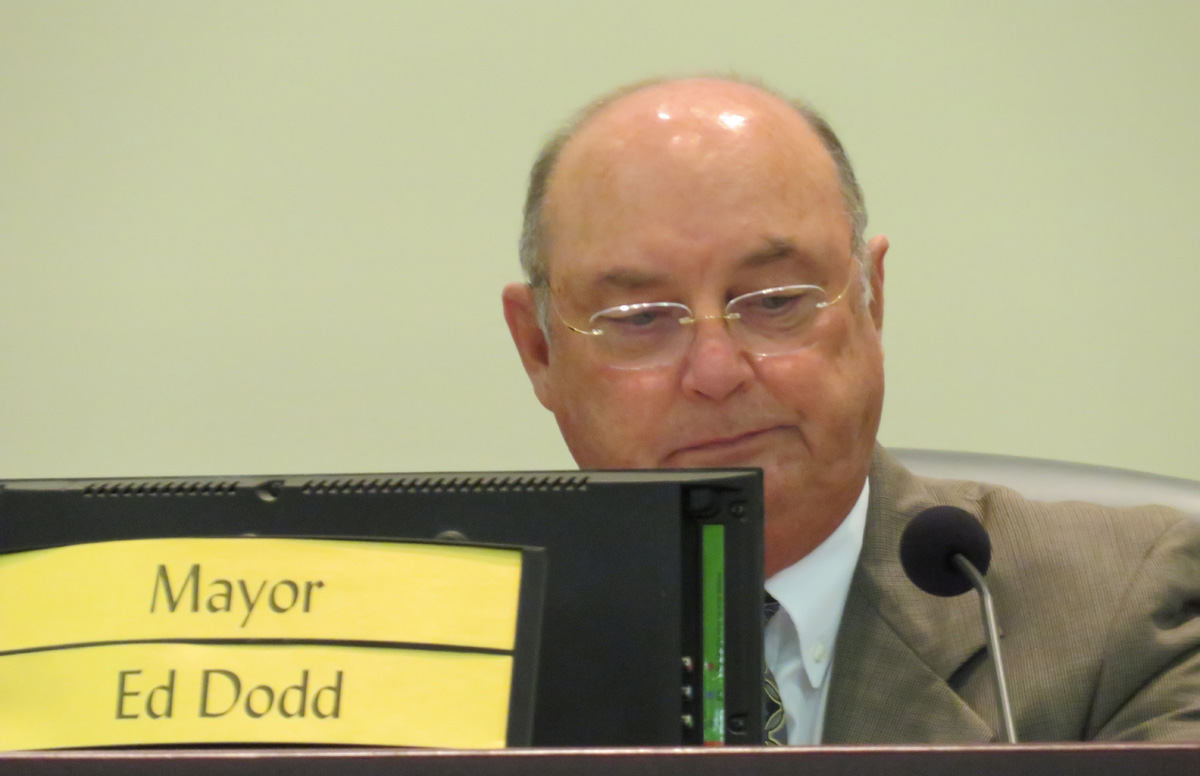 Sebastian Mayor Ed Dodd was verbally attacked by a resident after discussing an offensive flag. Bill Flynn, a Sebastian resident, claims the Mayor attacked Free Speech during the City Council meeting on September 22, 2021.

During the meeting, Mayor Dodd addressed that a flag was plastered on a Sebastian resident’s house. It specifically names the President with “Fu** Biden” spelled out in assault rifles.

“To set the record straight, I said that the sign was protected by Free Speech; my question was do we accept someone spelling out the Fxxx word, with images of military-style rifles, as proper within our City. We are at a time when our nation is as close to armed revolt as any I remember in my 74 years. My commitment to the Constitution, the rule of law, and to this nation is unwavering. My commitment to respect for my fellow man is also unwavering. I feel that we should sometimes do what is right rather than what we have the right to do,” Dodd said in response to Flynn.

But Flynn responded, saying, “while I agree we might have a right to do something, it does not mean we should. I did not like it myself.”

“I did hear you ask if there is a law that it should be removed. To me, it does not sound like you thought it was protected speech when you asked something like that. Maybe you were trying to step lightly. I will take you at your word. Our Constitution is under attack, and I seek to protect it,” Flynn said.

“That is a ludicrous statement. The Mayor did not demand the sign come down, nor did he say it was illegal to have the sign in place. He simply asked that the owner of the ‘offensive’ sign to take it down as a gesture of civility. Let’s be clear, my friend, the first amendment also applies to the Mayor,” Hill wrote.

Many residents in Sebastian agreed with Dodd that it should be common courtesy not to post large flags with offensive language spelled out with assault rifles about our President, whether people voted for him or not.

You can be the judge by watching what Dodd said at the meeting, but it does show his concerns. Many residents disagreed with Flynn, finding no evidence to back up his claims that Free Speech was attacked.

“I received a couple of phone calls about a sign that’s hanging on a house in Sebastian, and I’m not going to talk where it is. But I’m going to tell you that the sign spells out the F-word in symbols of military-grade in-style weapons,” Dodd said at the meeting.

After reading some court cases on the First Amendment, Dodd said that not everything is subject to First Amendment freedoms. He said certain things fall outside of that realm. For example, yelling “Fire” in a crowded theater, and if anybody gets hurt, it’s not necessarily your First Amendment rights.

“There are some exceptions to the First Amendment for signs that can incite violence,” Dodd said.

Dodd said he doesn’t think it’s something people want to see in the City of Sebastian with 30,000 people, and the sign bothered him.

Councilman Bob McPartlan was concerned about any sign making threats against the current President or the previous President, which usually warrants a call to the Secret Service.

“While we may not agree with the wording on such flags, as a person who drives by, the First Amendment still covers the ability to say you don’t like somebody,” Councilman Chris Nunn said at the meeting.

Nunn also said that having words like that doesn’t necessarily mean you want somebody to die literally, and the First Amendment still covers it.

The Church at the Cross in Sebastian has been running with the topic ever since President Donald Trump lost the election by calling themselves a Patriot Church, replacing days and times for Bible studies with Constitutional teachings. Many residents say the Constructional subject is apparently more popular than the teachings of the Bible.

But in the end, many citizens we spoke with do not believe the Constitution or their freedoms are under attack. Instead, they believe all the fuss started when the government recommended face masks and vaccines to help fight against the pandemic.

Most people who responded to Flynn didn’t see any attack on Free Speech by the Mayor. They believe Dodd was only discussing the situation, as many are, and was looking for a solution.

“This entire discussion is ludicrous. Most of you are quoting a Constitutional right that does have limits and seem to forget that a right to do anything is limited to how it impacts others. Do I agree with flag’s message? ABSOLUTELY! Should he take it down? YES! And that is what is wrong with this country today. I am a proud veteran, support the Constitution and hopefully respect everyone’s rights,” Chris Poole, a Sebastian resident, wrote in response to Flynn.

“My point is the second amendment states you can own a gun, but it does not, however, give you the right to use it whenever or wherever you want. The First Amendment is the same for your mouth. Use your mouth lawfully with common sense instead of trying to shock or incite problems, and all will be good,” Poole added.

Another resident said, “people can find any reason to say their freedoms were violated, but it doesn’t make it true.”