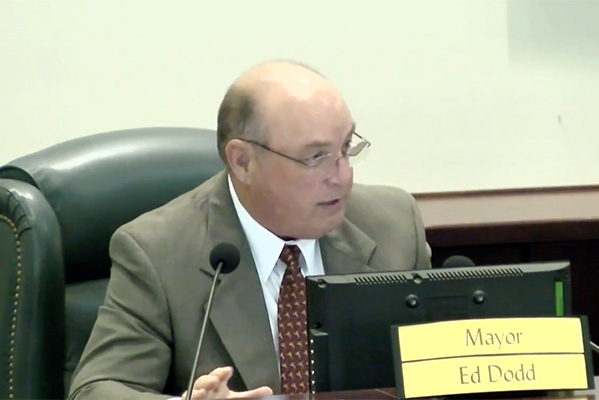 The next Sebastian City Council meeting is Wednesday, April 22, 2020, which could be a very interesting meeting.

However, City Attorney Manny Anon says Mayor Dodd did nothing illegal when closing the meeting.

“The gaveling of the meeting closed by the Mayor was legal, but not consistent with the procedural rules that were previously adopted by the Council. In accordance with (IAW) Resolution R20- 02, Section 1, it states ‘the City Council will follow the current edition of Robert’s Rules of Order Newly Revised as a general guideline in the conduct of all meetings and workshops.’ Further, it states, ‘failure to follow said rules shall not affect the validity of any action taken,'” Anon said.

Gilliams also asked Anon whether the Mayor’s Declaration of the Local State of Emergency was legal. Anon told Gilliams it was legal.

“Yes, it was legal for the Mayor to declare the Local State of Emergency. IAW Section 2-37 of the City of Sebastian Code of Ordinances, ‘the Mayor may in times of public emergency, or imminent threat thereof, declare a state of emergency within the boundaries of the city.’ The ordinance goes on to read that ‘the city council may terminate a state of emergency at any time,'” Anon said.

Gilliams then asked Anon if it was permissible to conduct Virtual Public Meetings right now for the City Council. Anon said it was.

“Yes, IAW Executive Order (EO) 20-69, it is permissible. This EO suspends the requirement of a physical presence to establish a quorum of a local government body. Also, media technology, such as telephonic and video conferencing, may be used as provided by Section 120.54(5) (b)2,” Anon said.

Sources tell us that Gilliams expected to become Mayor last November after winning a seat on the city council. However, the city council nominated Ed Dodd by a vote of 3-2. Since November, Gilliams has continuously challenged the Mayor, City Manager, and the City Attorney during the meetings.

Maulti did not respond to an email seeking comment.

“Mayor Dodd has been doing an outstanding job for the City of Sebastian since he took control of the gavel. Now, it appears that some of our Council Members are attempting to overthrow our government by violating our charter and removing him from his chair without cause. This is very dangerous as the rule of law would not exist for these council members, and Sebastian would essentially become a banana republic with Mayor Damien Gilliams at the helm. The only way to stop this from happening is for the public to stand up as it never has before and demand that the rule of law be respected,” Councilman Jim Hill told Sebastian Daily.

We do know that a lot of residents support Ed Dodd as the Mayor. Many residents have told us that Dodd has done a fantastic job handling the City Council meetings and keeping them informed during the coronavirus pandemic. Some residents are voicing concerns.

“After learning of this agenda item to reorganize the position of Mayor, my family is disgusted and saddened. We are a small city struggling like those around the world through an unprecedented and scary time. This request is just another example of proof positive that these barely elected councilmen are unfit to serve this fine City. Only a person(s) who is devoid morally, ethically, and without character would even ‘think’ to choose this point in time to try a shameless and, most importantly, baseless political maneuver like this request. This is a call to all responsible and concerned citizens of the City of Sebastian at an already difficult time. Shame should come to them,” Sebastian resident Michael Frank told Sebastian Daily.

There have been times when Mayor Dodd had to ask Gilliams not to disrupt the meetings.

The recent behavior by council members Pamela Parris and Damien Gilliams were enough for several concerned citizens to create a PAC group hoping to recall them. The group plans to begin collecting signatures soon.

“This is exactly the kind of hatred for authority and government that they represent. They want all people in control that will represent their private interests and do exactly what they want them to do. This is why this recall is more important than ever. We can’t let illegal backroom deals take over our City. This at a time when our Country, State, and our Town are under a state of emergency. Trying to do this when they think people will be too scared to come out and voice their concerns and outrage. They should be ashamed of themselves and should be bonding, not dividing during this difficult time. Now more than ever, the citizens need to join our fight. Our Facebook page is Sebastian Voters Against Gilliams and Parris. Please join us,” the group said.

In addition, Mayor Dodd has been very forthcoming to the press to ensure information is available to all residents. Mayor Dodd has also been interviewed twice so far by Sebastian Daily during the pandemic, providing valuable insight and updates as the City reacts to the direction from the Federal and State Government Emergency Management Offices.