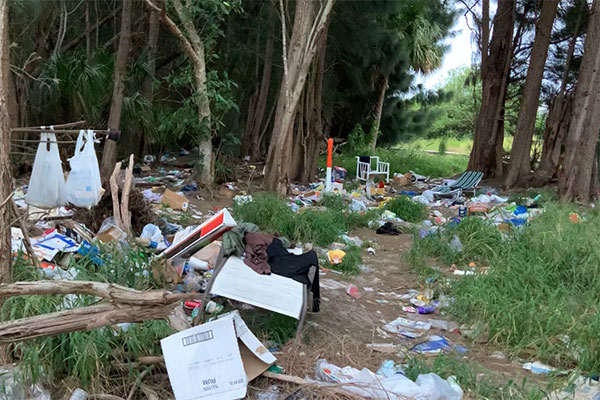 Trash left by two homeless men near the entrance to Barefoot Bay.

Two homeless men are accused of leaving trash and syringe needles inside a section of the woods near the entrance to Barefoot Bay.

Bobby Fluellen and Freddy Fluellen are often seen walking the streets in the community and living in the woods where the trash can be seen scattered everywhere near Barefoot Bay Boulevard.

Barefoot Bay resident Jim Gallagher notified the Florida East Coast Railway and the Brevard County Sheriff’s Office about the trash. The property owner was notified about the trash on Friday.

“I was in the homeless camp earlier today. It would make you vomit. There were needles, human feces, and other drug paraphernalia lying around. I could not imagine the filth these individuals tolerate,” Gallagher said.

Last Friday, a deputy issued a trespass warning to the Fluellen brothers. The landowner now has 14 days to clean up the trash and needles on the property.

Mostly sunny in Sebastian until later in the week

Mostly sunny in Sebastian until later in the week