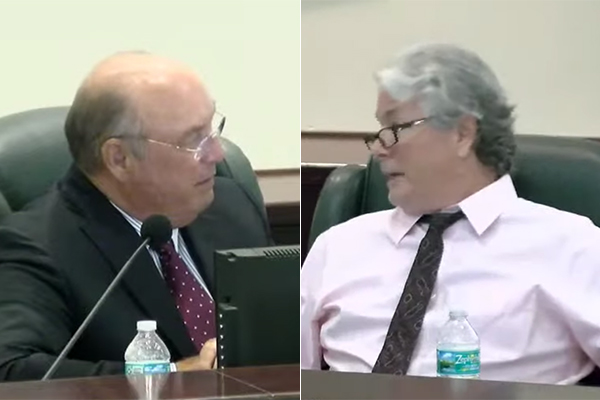 The Sebastian City Council meeting Wednesday was civil up until Councilman Damien Gilliams brought up the annexation and his civil rights.

Gilliams couldn’t keep the annexation out of his mouth. Even after City Attorney Anon and Mayor Dodd repeatedly warned him during Tuesday’s meeting that their case with the Pelican Island Audubon Society is still in litigation. They could end up in more lawsuits by discussing it with the public.

Many residents believe that Gilliams is in cahoots with people who run the Pelican Island Audubon Society. They also don’t believe he’s acting like a Council member or protecting the city from further lawsuits.

The City Council agreed to meet for an executive session scheduled for Monday with the city attorney to discuss how to move forward with the annexation lawsuit.

However, Gilliams felt it was important to discuss possibly suing the former city attorney since the city lost the case.

The City of Sebastian lost the annexation case on a small technicality that had nothing to do with the complaint. The issue with the technicality could be resolved.

Even so, Gilliams went on to guess what the legal fees may be for the city going forward if they decide to appeal. Mayor Dodd and Councilman Hill interrupted Gilliams to remind him again that they are not allowed to discuss the case with the public.

“This is inappropriate to start having this discussion in public immediately following the setting of an executive session to have this discussion,” Hill said.

Mayor Dodd agreed with Hill and asked Gilliams not to discuss the annexation until after the executive session on Monday.

“Under the charter, I am entitled to speak about anything I want under my matters. And you’re going to deny me my Constitutional right,” Gilliams asked Mayor Dodd.

Mayor Dodd reminded Gilliams again that they are still under litigation and are not supposed to discuss it. But, Gilliams said he wasn’t talking legal strategy, but common sense.

“What you’re doing is you’re hijacking the meetings Mr. Mayor so that we’re not allowed to speak, and this way, you can get business done behind the scenes with your buddies,” Gilliams alleged.

Gilliams then wanted to challenge Mayor Dodd, so the Council went into a vote to decide if Gilliams should talk about the annexation. The vote was 3-2, asking Gilliams not to discuss the case. The only two that voted in favor of discussion were Gilliams and Parris.

“What you do here, every night we have our meetings, you purposely distract and disrupt every time I speak,” Gilliams said after the vote.

He continued to talk about his civil rights and stated that Mayor Dodd is violating his rights.

“This council and this community is going to be held accountable because you are the leader, and this council is allowing it to happen,” Gilliams said.

Gilliams then told Mayor Dodd that November is right around the corner and that he wishes him “a lot of luck.”

“You have every opportunity on Monday at the executive session to try and convince anybody you want to convince to do whatever vote you would like for them to do. There are legal ramifications that require to be done in that meeting. I know you don’t understand that, and you choose not to understand that,” Mayor Dodd told Gilliams.

Mayor Dodd also addressed other allegations made by Gilliams to get money back from the previous attorney who represented the city on the annexation case.

Mayor Dodd then told Gilliams that he looks forward to November and what’s going to happen between now and November.

Damien Gilliams, Pamela Parris, and Charles Mauti are still facing a lawsuit filed by a government advocate group over the Sunshine Law vilotions.

Gilliams and Parris are also facing criminal charges for breaking the Sunshine Law and a count of perjury for lying to the State Attorney’s Office.

The PAC group, Sebastian Voters Against Gilliams and Parris, has collected thousands of signatures from petitions to recall Damien Gilliams, Pamela Parris, and Charles Mauti.

The group will be collecting signatures Friday and Saturday from 8:00 a.m. to 4:00 p.m. at the tower clock near Riverview Park. It’s a drive-up petition, so you don’t even need to get out of your vehicle.

City of Sebastian to discuss Graves Brothers annexation with attorneys