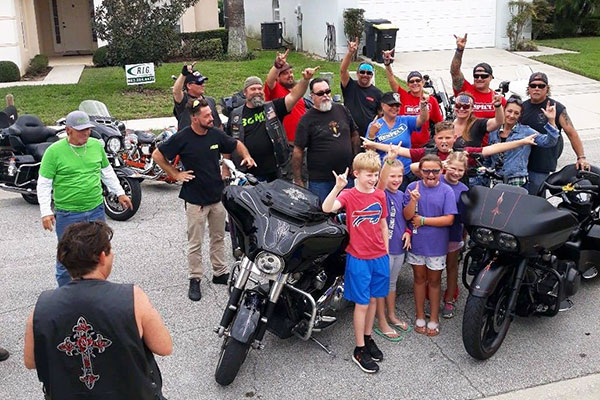 Bikers Against Bullies USA liaison for Florida Troy Holmquist, aka Marine Troy, was contacted about a month ago by AJ Rommel. She was looking for advice about how to deal with her son, Caden, being relentlessly bullied by a kid out in Davenport, Florida.

“In trying to help her through the difficulties, we just began talking, and I learned of Caden’s upcoming Birthday Nov 7, where he turns 11. Now since we are all volunteers and have families of our own, a Thursday mid-week ride out to west Florida was most likely not going to happen,” Sebastian resident Holmquist told Sebastian Daily.

“AJ had let me know they were planning a Sunday party, and this put the wheels in motion. I threw a post out on our Florida FB page to gauge interest, and it just exploded. Huge interest, the weather looked nasty early, so this may have played a part in keeping some riders away. Turned out to be a beautiful ride over,” added Holmquist.

The entire Bikers Against Bullies group, along with Robin Lane Phillips, Founder of Richard Phillips Down Biker Fund, surprised Caden at his home.

“As we pulled up, the entire family was outside, and things went crazy. The surprise and look on his face was priceless. We all pulled up as loud as we could be, of course, at which time we proceeded to put Caden on my motorcycle, let him start it, open up the throttle a bit, and just hung out for couple hours,” Holmquist stated.

They even took Caden and his mom for a ride around the neighborhood and brought Caden gifts.

“Caden loves crazy socks, as do I, and I made sure the ones he received I also had. We are now “Sock Partners,” and he sends pics of the ones he wears to school, Holmquist stated.

Bikers Against Bullies USA is an anti-bully awareness group made up of bikers but not limited to bikers. They all share the same passion, which happens to be our children. To help and guide them, to build their confidence, they want them all to feel like they matter, that they have a voice, to STAND UP BE HEARD, which is our motto.

Is Arlo Guthrie’s house for sale on Indian River Drive?