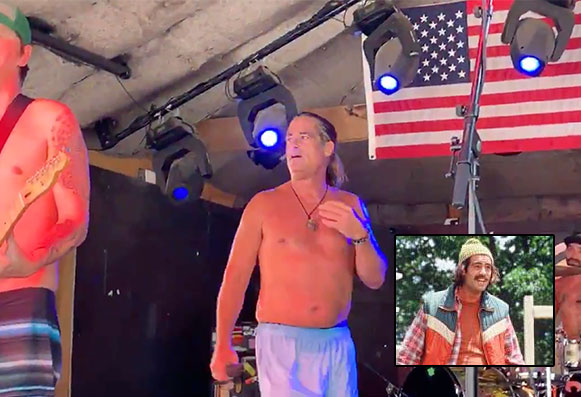 Peter Dante, famous for his movie roles with Adam Sandler, was on stage at Captain Hirams in Sebastian, Florida.

Actor Peter Dante, who is most popularly known for frequently appearing in films from Happy Madison Productions alongside his friend Adam Sandler hit the Capt Hirams stage on Sunday during their Summer Reggae Series.

Dante was featured with the band Tunnel Vision. He is not listed as an actual band member, but he frequently performs with them. He was full of energy on stage, and fit right in with the band as if he was an everyday member.

The 50-year-old actor has been in almost every Adam Sandler movie ever made, including The Waterboy, Big Daddy, Little Nicky, Mr. Deeds, Eight Crazy Nights, 50 First Dates, Jack and Jill, among others.

He is also a musician and singer/songwriter, which explains why he was performing with the Surf, Reggae, Ska band Tunnel Vision.

Only a handful of people recognized who Dante was, everyone else was shocked later to find out that is was the famous actor.

The Captain Hirams Summertime Reggae series offers a concert every Sunday until August 26, 2019. The concerts are from 2-6 p.m. at the main stage.