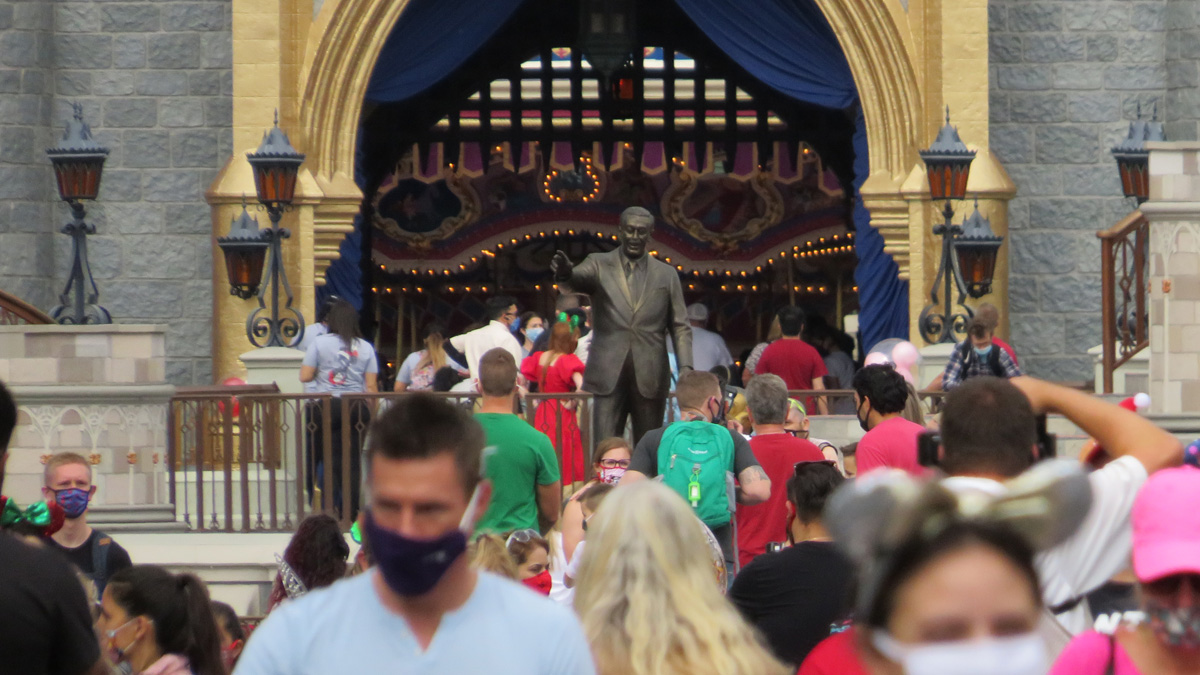 If you’re planning a trip to Walt Disney World’s Magic Kingdom, EPCOT, Animal Kingdom, or Hollywood Studios, you’ll have to wear a mask at all times except when dining. The Disney parks have been open during most of the COVID-19 pandemic, except for the cruise lines.

A couple months ago, Sebastian Daily visited the parks and discovered substantial restrictions. They are taking social distancing seriously and reminding parkgoers to wear their masks at all times.

Don’t want to wear a mask at Disney? They won’t let you in, or they will ask you to leave the park. There’s no arguing; these are the rules.

We stayed at Disney’s Pop Century Resort, where masks are mandatory throughout all areas. You can sit by the pool or bar without a mask as long as you’re not walking. If dining at the resort, you can remove your mask at the table.

As we entered our room, we smelled the odor of bleach, indicating they are cleaning the rooms thoroughly. The rooms are clean and recently remodeled.

They removed all the carpet and put down tile in the rooms, and the sinks and bath areas have been renovated. We enjoyed our stay in this resort and appreciated the transportation to and from the theme parks.

The Disney Skyliner is a new way of transportation between the resorts and parks. It’s swift, and each family can be in their own Skyliner, which makes it great for social distancing amid the COVID-19 pandemic.

We rode the Disney Skyliner to EPCOT from the Pop Century Resort. However, we had to take the buses to Walt Disney’s Magic Kingdom and Animal Kingdom.

A Disney representative told Sebastian Daily that they plan to expand the Disney Skyliner soon.

Walking into the Epcot theme park at Walt Disney World was awkward with so few people. Epcot is currently going through a significant overhaul near Spaceship Earth, which will take two years to complete.

There will be a shift in theme from technical innovations in communications to power storytelling. There will be new show scenes that will lead park visitors on a journey.

Disney does have plans to redo Spaceship Earth, which will have new scenes and upgrades. There will also be a new post-show during the ride.

There are no fireworks at Epcot, and gone are the parades. However, there are short single-vehicle parades that appear around the clock. They are very short, but an excellent addition.

As we walked around the World Showcase, there were far fewer people than we’re used to seeing. Gone are the crowds, for now.

Disney’s Animal Kingdom Theme Park was pleasant during our visit, similar to Epcot without large crowds. The lines to all the rides were fast.

The animals are everywhere, and you can get some magnificent camera shots if you’re a photographer.

Since they’re not doing parades, Disney is putting characters into boats and waving at people. One boat had a band, mostly drummers, that would come and go.

The Magic Kingdom Theme Park was busy, but still fewer crowds than regular days. I got on every ride within minutes, and the lines went fast. I have never been to Magic Kingdom with so few people in my life.

We made our way around to the Jungle Cruise and Pirates of the Caribbean in Adventureland. Then we rode the Big Thunder Mountain Railroad in Frontierland.

But it was the famous Space Mountain where we enjoyed a rollercoaster in the dark in Tomorrowland as well as a visit to Walt Disney’s Carousel of Progress.

You will forget to put your mask back on at the parks from time to time. But, the Disney staff will remind you. They understand people will forget; it happens. There are also mask vending machines available at the parks.

Disney’s Mobile Food and Beverage Ordering allow people to place an order and pay through the Disney APP. The APP then notifies you when your order is ready to be picked up at the window.

The menus are all digital now and can be read by scanning a digital code using your mobile phone.

While this new way of dining is supposed to help with social distancing and convenience, it has some problems. Sometimes the app doesn’t work correctly, adding to the frustration for some.

Also, not everyone likes this new way of ordering. Many people preferred to order at the window and not use the mobile app. It will undoubtedly take more time before most people accept this as the new way to order food.

We book our travels to Disney during the week instead of the weekend. The theme parks are already less crowded than usual because of the COVID-19 pandemic.

However, you’ll see faster lines to all the rides when visiting any of the theme parks during the week. Magic Kingdom is still the most crowded park, but you should have no problem with Hollywood Studios, Animal Kingdom, and Epcot.

Grouper, hogfish, and blueline tilefish seasons reopen May 1 in Atlantic

Grouper, hogfish, and blueline tilefish seasons reopen May 1 in Atlantic