Dignity Village is Not a Homeless Shelter Near Sebastian, Aims to Use Current Motel/Hotel Zoning 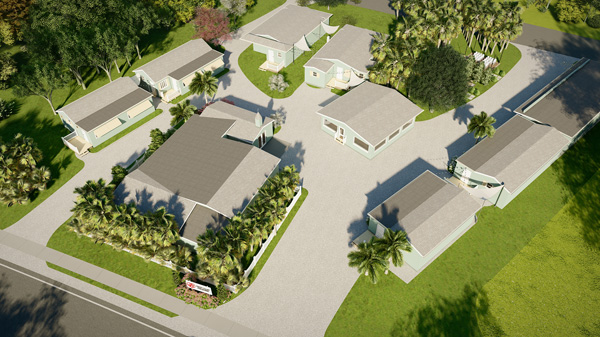 When we heard that The Source purchased the Pelican Island Cottages near Sebastian, many people, including myself, assumed it would be a “Homeless Shelter.” The fact is, it’s still going to be used as a motel/hotel. Therefore, the zoning of the property will not change.

The new Dignity Village has been a big learning curve for me and many others. And to be honest, the property will look better than before once they complete the work.

We also learned the property is not a place to welcome anyone off the streets. So again, it’s zoned for a motel/hotel, and the persons renting the units will pay to live there.

“We have a septic system in need of repair, and it’s possible the property has been affecting the lagoon for over 50 years,” Tony Zorbaugh, Executive Director of The Source, told Sebastian Daily.

I am confident that even its neighbors who oppose the project will have a better understanding once the renovations are complete. Each unit will be restored and updated, and the property will have a new exterior painting and landscape.

Keep in mind that this property is not within the Sebastian city limits. But being that it’s so close, the project is still part of our community. City Councilman Chris Nunn recently visited the property and had nothing but good things to say about the project.

I felt Sebastian Daily owed it to its readers to schedule a visit and talk with Tony Zorbaugh, the executive director at The Source. Councilmember Nunn and Indian River County Commissioner Laura Moss were also present for the tour.

Tony Zorbaugh and The Source

As I met Tony Zorbaugh for the first time, I noticed how straightforward he is, honest, and excited about the project. We walked the property, and he went into detail about each unit.

Zorbaugh said he’s not changing the land use or zoning of the property, and those staying on the property will have to pay rent.

For example, people in the program can have their teeth fixed with Dignity Smiles to help them feel confident when applying for jobs.

So, as you can see, The Source does a lot in Indian River County and Brevard County.

There are a lot of concerns out there in the community, especially from residents who live near Dignity Village. I understand their troubles, but honestly, there shouldn’t be anything to cause worry since the property will be used as a motel/hotel.

The Source and its funding partners are spending millions to renovate the property. During the walkthrough, we couldn’t believe how neglected the property was and the living conditions of the people renting the cottages.

Here’s a few photos of the current conditions:

Zorbaugh and The Source want to make it all new again, and they are working very hard to achieve that goal.

Also, many neighbors are worried about the property attracting transients and people off the street. The fears about Dignity Village are blown entirely out of proportion.

Some neighbors are afraid of rising crime, but it won’t. The people staying there will not be drug addicts or thieves.

Did you know that under Pelican Island Cottages, the sheriff’s office was there quite a few times? The place was a disaster, and the people it attracted in the months leading up to the sale didn’t have the neighbor’s best interests. Zorbaugh cares about the neighbors and will not put bad people in the remodeled cottages.

Zorbaugh mentioned that he invited all the surrounding neighbors for a Town Hall meeting to understand what they plan to do with the property. He informed everyone that Dignity Village was not a homeless shelter or a homeless camp. Instead, it is a project to offer temporary affordable housing.

However, Zorbaugh was met with opposition from neighbors who live near the property on Indian River Drive. Neighbors advised that they didn’t want “his kind” near their properties.

And while I was still in disbelief at how the area residents acted towards Zorbaugh during his Town Hall meeting, we witnessed one of the neighbors taking pictures of us from the roadway as we walked the property. Sadly, Zorbaugh said it is a common occurrence.

What kind of people in our community find it acceptable to threaten Zorbaugh and his family? He’s been receiving email threats from neighbors trying to stop the project. He’s worried about himself and his family. Here’s an excerpt from one of the actual emails:

“You fat fu**. You’re nig*** wife, and you’re sh** shelter ain’t wanted here in Sebastian. Go back to the crap state you came from, or I got an idea, put you’re homeless sh** shelter in Palm Bay off Plantation Cir that’s the perfect fu**ing place. Burn in hell with that shelter, you fat fu**,” the email reads. There’s another email calling him a pedophile and other things.

I am sorry, but that’s not what we do in Sebastian. We don’t email threats or try to bully a man and his organization. It’s not acceptable.

We ask those who are sending these emails to stop. The property is going to be restored and prestigious. It will not impact property values.

There’s also a petition going around to get people all worked up. But unfortunately, there’s a lot of misinformation to deceive people, and it’s sad.

If you have questions, please visit the property and ask Tony Zorbaugh.