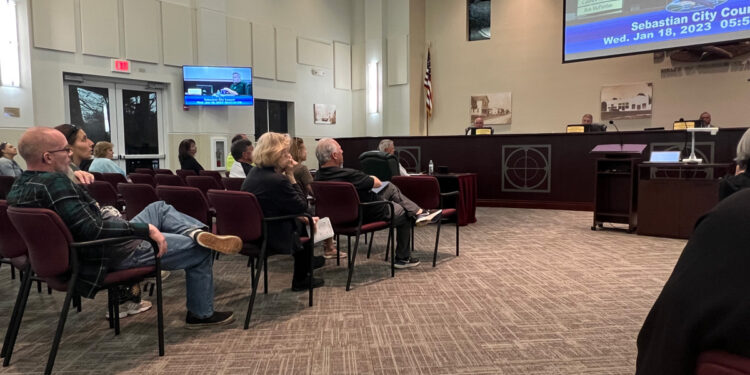 The lots, located near the corner of Roseland Road and CR-512 (Sebastian Blvd), were recently cleared to build homes, and that has raised concerns among several residents who showed up for the special meeting.

Vice-Mayor Chris Nunn, who requested the meeting, conducted a quick presentation showing the three lots near the corner of Roseland Road and CR-512.

Councilmember Ed Dodd said he wasn’t in favor of purchasing the lots and doesn’t feel the city should buy property every time it’s a potential safety issue. He also said the city has other issues, and this parcel isn’t usable to the public because of the safety issues and liability it would create.

“I would be in favor of waiting for the county to make a decision on what they are going to do or not do on this,” said Dodd. “There’s no way we can tell them they can’t build there.”

But Dodd later said he has no issue with trading these lots with the builder for similar lots the city already owns.

Mayor Fred Jones compared the three lots to one property on Fleming Road close to the street and said things are doing well despite the traffic. He doesn’t think the city should spend money on a property that is unusable and will sit. Jones also said personal property rights are first and foremost.

“If that lot is platted to have a home there, they have a right to do it as long as they follow our land development codes and everything else, and we can’t stop that,” said Jones.

Jones also stated he’s concerned with many locations that have safety issues in the city, but there are certain things they can and cannot do.

Councilman Bob McPartlan also mentioned similar safety issues in other parts of the city, such as Barber Street. He does not favor buying the lots but isn’t opposed to a land swap.

McPartlan questioned why they had the special meeting and didn’t understand the urgency. He didn’t feel they could accomplish anything with such quick notice and not having a chance to do research.

Nunn told McPartlan that it was urgent to meet because the lots were ready, and the builder was moving forward with permits. Nunn didn’t feel the city could wait another week or two for the next council meeting.

“I called the meeting because another week means there’s fill on the lot, there’s permits issued,” said Nunn. “In my opinion, we can’t stop them from building these houses. 100 percent agree on personal property rights, so we cannot stop them from building it. The only thing we could do is possibly purchase them. It sounds like we’re not willing to do that.”

Councilwoman Kelly Dixon said she agreed with Dodd and the city has a lot of other things they need to do and doesn’t feel purchasing the property is the right thing to do.

“We just said at the last council meeting that we are not in the business of buying property; in fact we were trying to get rid of property,” Dixon said.

Nunn said he understood what the other council members were saying and that it was a lot of money to purchase the lots. But he also emphasized that it’s a small price to pay to save potential lives near a dangerous intersection.

Ultimately, the council voted to direct City Manager Paul Carlisle to contact the builder, DR Horton, to discuss the three lots. One option, as Dodd said, is to trade properties.

On Thursday, Carlisle contacted DR Horton, and a meeting has been set for next week. Sebastian Daily will update when more information is available.

During the meeting, a few residents mentioned that neighborhood roads in Sebastian that may have similar safety issues could not be compared to a major county road like Roseland Road.

Sebastian resident Joy Etheridge said building on the three lots is a major problem. She explained that houses are going up daily using heavy equipment, concrete trucks, and cranes for the trusses. She doesn’t see how building on the lots will work since they are so close to the roadway.

“I understand that there’s a problem in purchasing, I get that, but the county should definitely do something about it. It should have never gotten this far,” Etheridge told the council.

Etheridge also commends Nunn for saying something about the potential problem. She then addressed the other members of the council.

Etheridge also mentioned the potential issues with trash trucks, package deliveries, and mail trucks in front of the driveways in the turning lane.

Sebastian resident Debby Folks told the council that clearing the lot was a bad idea since the turning lane is in front of the lots on Roseland Road.

“To me, it’s insane for everybody to even think to build anything there,” Folks said. “To even get in their driveway, they’ll have to go and make a U-Turn, or if you’re coming off of CR-512 onto Roseland Road, they’ll be holding up traffic to get to their property. It is very, very dangerous.”

Some residents also said the new property owners would have difficulty getting out of their driveways with them being so close to the turning lane.

For example, Keith Miller said he lives off Roseland Road and has difficulty getting onto the road. He urged the council to come up with an idea but was against buying the lots because “then we’re stuck with them.”

Cerb Sol said he was surprised that only Vice-Mayor Nunn considered purchasing the lots to prevent potential danger. Sol suggested using the three lots to dedicate something nice for Sebastian but was disappointed that the other council members didn’t even consider it.

Some residents said it comes down to property rights and don’t believe it’s the city’s problem. Instead, they say it’s the builder’s problem and anyone who buys the new potential homes.

But while the rest of the council agreed it comes down to property rights, something they don’t want to get into, some residents say those rights could infringe on their rights and the roadway danger that can follow.

Mary Jo Walker said she’s been in city government for many years and understands that cities don’t want to ask questions that may upset the county. However, she says that sometimes those hard questions must be asked as the council represents the people.

“You all represent the city. You were elected to ask the hard questions, to meet with the people, to meet with the other agencies, to bring all this forward for the people who elected you,” said Walker. “You’re talking 2023 now. In 10, 15, or 20 years, our young people are going to be our age, and they’re going to say, ‘why didn’t they do something back then’ which is what is being said now.”