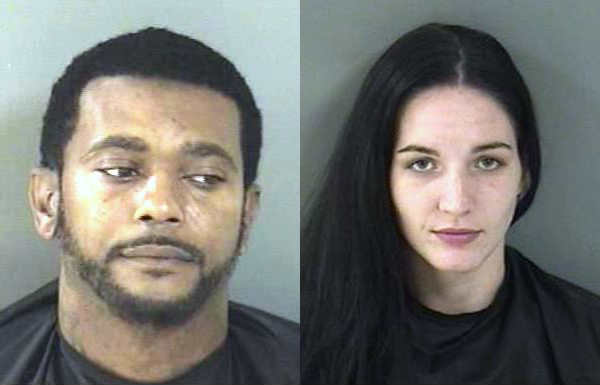 VERO BEACH – A Fellsmere woman and a Vero Beach man were arrested with 55.5 grams of heroin laced with fentanyl.

The Indian River County Sheriff’s Office made a traffic stop on a vehicle for an illegal window tint in Vero Beach.

During the stop, Chandal Sullivan, 23, was found to be in possession of 55.5 grams of heroin found in her vaginal cavity.

Edward Eugene Marshall, 43, was also in the vehicle. He was currently out on bond for an arrest on July 14, 2017, for several narcotic charges, including heroin with fentanyl.

Sullivan told deputies that Marshall asked her to ride with him to West Palm Beach to which she agreed.

Marshall met with a friend and returned with a bag of heroin.

Sullivan stated that when the deputies made the traffic stop, Marshall told her to hide the drugs at which time she concealed the bag in her vagina.

Marshall told deputies that he called a heroin dealer out of Palm Beach County to “front” him two ounces of drugs.

Sullivan and Marshall were placed under arrest.

Marshall questioned how the police could arrest him when Sullivan was the one in possession of the heroin.

The deputy explained to Marshall that he acknowledged that the heroin was “fronted” to him and it was his vehicle used to travel to Palm Beach to retrieve it.

Both suspects were transported to the Indian River County Jail.

Sullivan was charged with Felony Traffic Controlled Substance. Sullivan’s bond is set at $35,000.