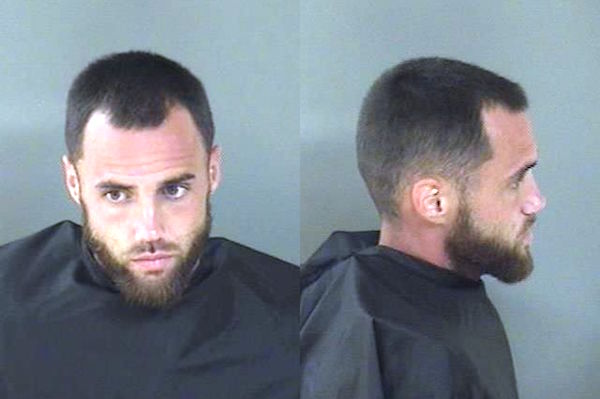 Last weekend, the Indian River County Sheriff’s Office responded to a domestic disturbance at a residence in the 1200 block of 13th Avenue SW in Vero Beach.

The victim told deputies that her boyfriend, Vicent Kahn, 27, had returned to the home after she kicked him out. She broke up with Kahn two weeks prior after learning that he is a convicted sex offender.

Kahn was convicted of lewd or lascivious conduct with a minor under 16 in 2009.

The victim said Kahn arrived at the home and allegedly began pounding his fist on the door attempting to gain entry.

The female and her four-year-old child were inside and called the police. Kahn broke the small glass window on the side of the front door with his fist and entered the home.

He then allegedly punched the female in the face, her side, and back. The victim also alleges that he punched the four-year-old child and shoved them to the ground.

Kahn went into the bedroom and took the home and car keys before fleeing the residence.

Deputies responded and narrowly missed Kahn as he fled. Blood evidence was collected from the crime scene as deputies attempted to locate Kahn.

“Today, a dangerous sex offender is off the streets and behind bars where he belongs. Kahn continued to harass the victim in this case after she made it clear that she did not want to date a sex offender. We encourage everyone to visit Sexual Offenders and Predators Search to find out more information about sex offenders living in your neighborhood, Indian River County Sheriff Deryl Loar stated.

Kahn was booked into the Indian River County Jail on counts of burglary of an occupied dwelling, child abuse, and criminal mischief. He is currently being held on $76,000.00 bond. Other potential charges are pending for violations of sex offender laws.