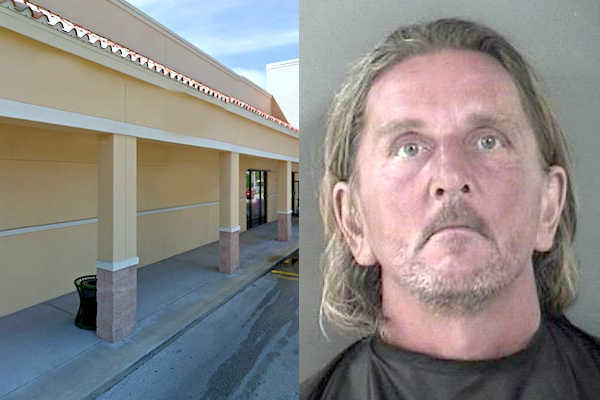 Man exposes penis to urinate on building at Publix in Vero Beach.

VERO BEACH – While on patrol, an Indian River County Sheriff’s Deputy spotted a man exposing his penis and urinating on the building at Publix in Vero Beach.

As the deputy pulled into the Publix parking lot near 12th Street in Vero Beach, he saw a “white male with long hair urinating on the corner on the building,” according to the report.

“He was facing East with his penis exposed. He was in clear view from the intersection of 12th Street and Commerce Avenue as well as the Public parking lot,” the deputy said, the report said.

The deputy made contact with Glen Robert Gregor, 51, and asked why he thought it was such a good idea to urinate on the side of the building.

Gregor said he just left Steinmart and forgot to use the restroom inside. As he walked, he decided he would urinate on the side of the building.

He explained that he was trying to use the building to conceal himself as he was urinating.

Deputies could smell a strong odor of an alcoholic beverage emitting from Gregor. When asked how much he drank, he said three beers within an hour and a half.

Then deputies found out that Gregor trespassed from Publix from a prior incident. He was arrested in February for disobeying the trespass warning.

The manager at Publix told deputies that Gregor entered their store before going into Steinmart.

Gregor said he only entered the Vero Beach Publix for a brief moment to weigh himself on the scale and then left.

Gregor was arrested and transported to the Indian River County Jail where he was charged with Exposure of Sexual Organs, Misdemeanor Trespass After Warning, and Disorderly Intoxication.