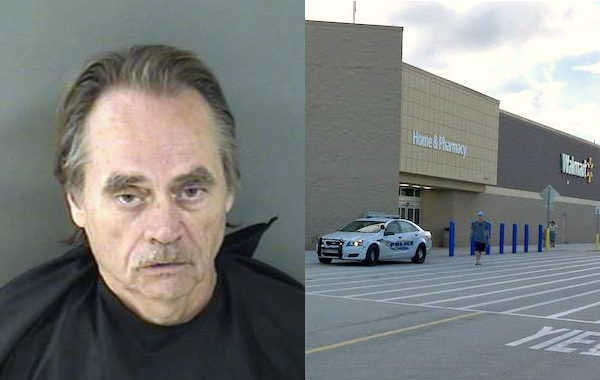 Walmart calls Sebastian Police about man exposing himself to juveniles in store.

SEBASTIAN – Employees at the Walmart in Sebastian called police about a man exposing his sexual organs in the store.

The Sebastian Walmart told officers that a man was walking around the electronic aisle of the store exposing himself by lifting up his pant leg and touching his penis.

Vern Francis Stitt, 68, was seen stalking two teenage girls who appeared to be 12 to 13 years old, witnesses told police, according to the report.

Stitt, who told police he works as a local construction worker, was seen “exposing and playing with himself to the girls” in the Walmart store, the report said.

Stitt then followed the girls into the clothing department.

He was then seen using his right hand to lift up his right pant leg to expose his penis at different times to the girls in the store.

Stitt can then be seen observing the juveniles after they were near a relative. At one point he was looking at their direction while concealing himself behind a pallet of televisions, the report said.

“The defendant then exits the store through the garden center exit and enters into a dark colored Ford Ranger with a tan bed cover, chrome rear rims, and black front rims.

Police were able to make contact with one of the juveniles who said an older man appeared to be “itching his exposed genitals” at them in one of the aisles.

The girl did not contact a manager or police because she thought that it might have been unintentional.

Officers then spoke with the second girl who said an older man was itching or grabbing his exposed penis.

Police identified the truck from video surveillance parked at the 600 block of Cavern Terrace in Sebastian.

“Based on the video surveillance footage and still photographs, I was able to determine that the individual who answered the door was, in fact, the same person,” the officer said, according to the report.

Police say Stitt never denied the incident, but he did not want to make a statement without speaking with a lawyer.

Stitt was arrested on two counts of Lewd Lascivious Exhibition and transported to the Indian River County Sheriff’s Office.

Tropical Update: Sebastian and Vero Beach in the Clear

Tropical Update: Sebastian and Vero Beach in the Clear