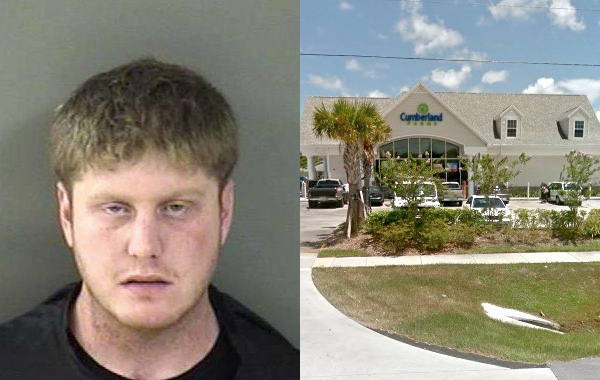 Caller tells Sebastian Police Department that driver was all over the road and parked at Cumberland Farms.

SEBASTIAN – A local citizen called the Sebastian Police Department about a drunk driver who was last seen parking at Cumberland Farms.

Lucas Goff, 24, was being followed by a Sebastian citizen who said he was allegedly driving “all over the road” and traveling at “variable speeds,” according to the report.

The complainant stated they saw the vehicle pull into the Cumberland Farms parking lot.

A Sebastian Police officer spotted the vehicle at the location and waited for the driver to return.

A short time later, Goff entered the vehicle and proceeded to turn south onto Barber Street.

“I observed the vehicle cross the center line and swerve back into the proper lane,” the officer said in the report. The vehicle “entered the lane of oncoming traffic. The vehicle was traveling at erratic speeds while being observed,” the report said.

The officer initiated a traffic stop on the vehicle. Goff told police he had consumed two beers. He had difficulty maintaining balance when exiting the vehicle.

After conducting a few sobriety exercises, the officer determined that Goff was impaired. He was arrested and transported to the Indian River County Jail where he was charged with driving under the influence.

Goff consented to a breath analysis which resulted in a BAC of .255 for the first attempt, and .260 for the second. The results were more than three times the legal limit.