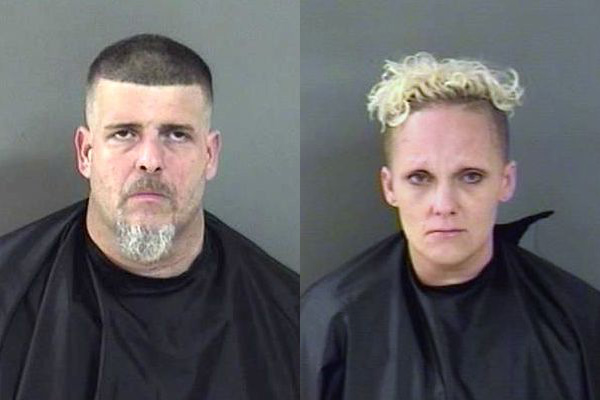 A couple from Micco were arrested Dale Wimbrow Park in Roseland, Florida.

ROSELAND – Deputies arrested two people at Dale Wimbrow Park in Roseland Thursday morning after finding marijuana and crystal methamphetamine with a 5-year-old girl in the vehicle, according to the Indian River County Sheriff’s Office.

Deputies patrolling the park after hours spotted a gray Chrysler 200 in the park.

“Upon making contact with the occupants in order to inform them that the park was only open from dawn to dusk, I detected the odor of what I know through my training and experience as fresh marijuana,” the deputy said.

Deputies said the time was 2:00 a.m. and Wolfe’s 5-year-old daughter was sitting in the back seat of the vehicle.

A consensual search of Wolfe’s person located a clear “plastic baggie with a white crystalline substance” and straw from her bra, the report said.

The substance was field tested and returned positive for crystal methamphetamine, according to the report. A marijuana joint was also found in the vehicle.

Wolfe told law enforcement that the meth belonged to Palmer. She explained that while leaving the house, Palmer dropped the meth and the straw near the car door. She put it in her bra so that her child wouldn’t pick it up, the affidavit said.

“Sharon advised she did not plan to consume the methamphetamine and was only holding it for Jesse,” the deputy said.

Palmer told deputies that the marijuana joint was his, but was unaware that Wolfe had methamphetamine in her bra. He denied all allegations made by Wolfe and said the meth belonged to her. He said they were only at the park to search for his phone and wallet, the arrest affidavit said.

Palmer and Wolfe were both arrested and transported to the Indian River County Jail.

Last month, Palmer was out on bond for allegedly hitting a woman with a hammer. As a result of this arrest, he is being held without bond.

Wolfe was also out on bond after being arrested for leaving a scene of an accident and driving on a revoked driver’s license. She is also being held without bond.

Information about the child and her whereabouts has not been released.

Sebastian Weekend Events at Earl’s, Hiram’s, Crab Stop, and Others