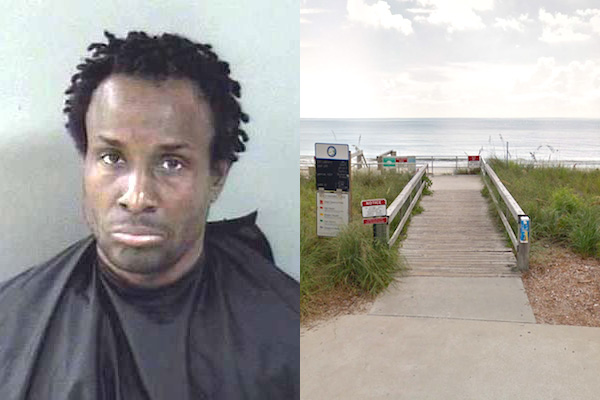 VERO BEACH – Over the weekend, a 45-year-old man was arrested after he allegedly exposed himself from his ‘Speedo,’ according to the Vero Beach Police Department.

Officers were dispatched to Humiston Beach Park at 1049 Easter Lily Lane in search of a man wearing an orange Speedo near the beach showers.

A Vero Beach lifeguard said the man exposed his testicles to a woman and her children on the beach. The lifeguard identified the suspect at the showers.

“The suspect was sitting on the ground facing the shower. He was wearing nothing but an orange Speedo bikini. The back of the swimsuit was below his hips, exposing his buttocks. The suspect was sitting in front of an open water spigot. He was holding the front of his swimsuit open allowing the water into his genital area. It appeared that he was stimulating himself,” the officer said.

Police approached the suspect, identified as 45-year-old Joseph Pierre of Vero Beach, and questioned him about the alleged complaint.

“The suspect turned off the water and stood up. His penis was mostly erect. The back of his swimsuit was still down below his waist,” the officer said.

When the officer questioned him about the complaint, Pierre denied the allegations.

Pierre refused to answer additional questions, such as his address and other information. As he walked away, a struggle ensued while the officer was trying to detain him, according to the affidavit.

More: Vero Beach Man Exposes Himself At Beach Near Waldo’s

Pierre was charged with Disorderly Conduct and transported to the Indian River County Jail for processing.

The woman and child had already left the beach before law enforcement had to chance to interview them.