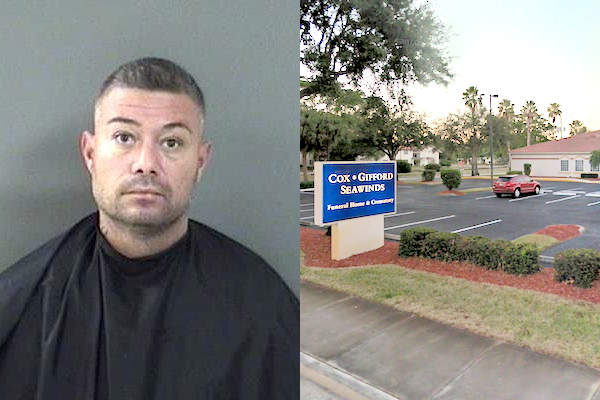 VERO BEACH – On Monday, the Vero Beach Police Department received a call at around 4:00 p.m. about a man lying on the ground at a funeral home on 20th Street.

Eric Fournier, 40, was seen passed out at the Vero Beach location. Officers attempted to wake him up, at which time they could smell the odor of alcohol.

“What man,” Fournier asked the officer, while slowly opening his eyes. He sat up and the officer asked if he was ok or needed EMS.

“I’m find man,” Fournier said. The officer then asked Fournier is he knew where he was, which he replied, “Yeah, I’m home man, what are you doing here?”

The officer told Fournier he was at a Funeral home in Vero Beach, at which time he looked around and seemed very confused. Fournier refused to go with EMS to the hospital.

Then, another officer arrived to the scene and said a van sitting in the parking lot matched the description of a drunk driver.

Two witnesses came forward and said they saw Fournier behind the wheel of the white Ford van with the name “RCJ Plumbing” on the side.

The first witness said she saw Fournier pull into the parking lot in a white van, and believed he was a delivery driver for Staples who delivers supplies to the funeral home during the week.

The second witness told police she saw Fournier sitting in the van before going inside the funeral home.

Following the tests, police believed Fournier was impaired. He submitted a breath sample, which was .283 during the first test, and .292 on the second. The results were more than four times the legal limit.

Fournier was arrested for DUI and transported to the Indian River County Jail.