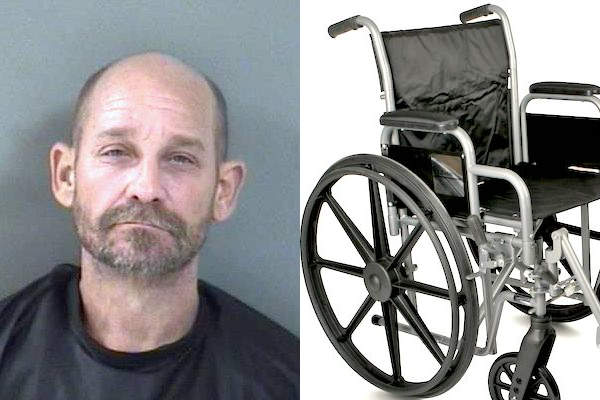 A Vero Beach man was arrested after beating an elderly woman who is disabled and reliant on a wheelchair.

VERO BEACH – The Indian River County Sheriff’s Office received a call about an altercation between a man and a disabled woman reliant on a wheelchair in Vero Beach.

The Vero Beach victim called law enforcement to report the altercation and said she was on the floor and unable to get up.

Christopher Michael Tuliano, 46, was seen standing on the street at the scene. Deputies made contact with Tuliano and instructed him to return to the home and unlock the door, so he could check on the welfare of the victim.

Tuliano unlocked the door and went straight into the residence and hurried towards the victim, according to the report.

“I order Tuliano outside of the residence, and after failing to gain willful compliance, I grabbed Tuliano from behind, securing his arms behind his back,” the deputy said.

Deputies then made contact with the disabled victim who was visibly upset and bleeding from a 3-inch abrasion on the inside of her left forearm. She was also terrified and became hysterical at the thought of being left alone.

The victim said that Tuliano “snapped” and grabbed her by the throat while saying, “I’m gonna kill you bit**,” and “I hate women, I hate bit**es.”

According to the victim, she almost lost consciousness after Tuliano squeezed her neck and slammed her head against the wall repeatedly.

Tuliano denied any sort of physical violence in the home and had no idea how the victim sustained her injuries.

Based on the investigation, Tuliano was arrested and transported to the Indian River County Jail where he was charged with Battery Domestic Violence and Abuse of an Elderly or Disabled Adult. As of Tuesday, he remains in jail with a $26,000.00 bond.

According to jail records, Tuliano has been arrested 13 times in Vero Beach since 2007.