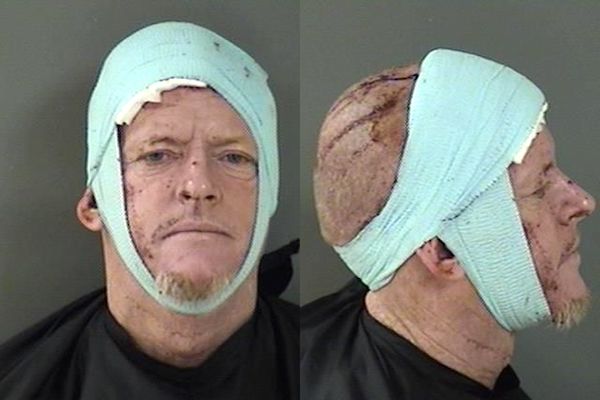 After being treated for a head injury at the Indian River Medical Center, Michael James Bales harassed patents at the hospital. Photo by Indian River County Jail

Michael James Bales, 46, who was treated for a head injury and released, told one patient he was a “fat f***” and that he would “shove these socks up your fu***** a**” as he was leaving the hospital, according to the report.

Bales then told another patient “Suck it up buttercup” as he walked into the hospital with a leg injury, the arrest affidavit said.

Deputies, who arrived and witnessed the statements being made by Bales to patients, escorted him outside and asked him to leave.

Once outside, Bales began cursing at people with children nearby as they attempted to enter and leave the hospital.

“When I made contact with Bales he was still belligerent and began cursing again. I could also smell the strong odor of alcohol emitting from his breath,” one deputy said.

Bales was arrested and transported to the Indian River County Jail where he was charged with Disorderly Intoxication.

Shortly after his arrest, a judge sentenced Bales to 5 days in jail.