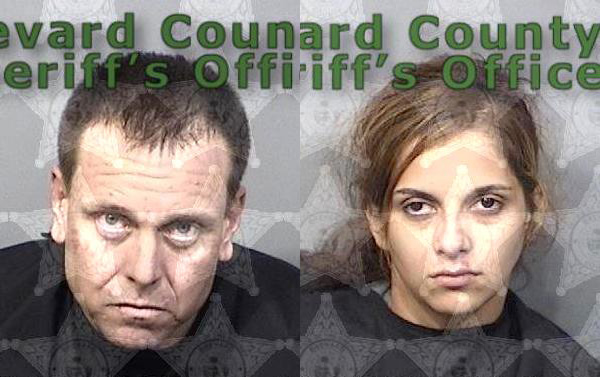 MICCO – Deputies charged two Barefoot Bay residents with drug trafficking after they found more than 14 grams of heroin hidden in a woman’s vagina, according to the Brevard County Sheriff’s Office.

On Monday, at approximately 10 p.m., a deputy conducted a traffic stop on a silver Ford sedan.

The two occupants in the vehicle were making “furtive movements” as they traveled approximately 1/4 mile before coming to a complete stop, according to the report.

The driver was Christopher Jon Bauer, 41, and the passenger was identified as Sandy Ann Perez, 23.

The deputy became suspicious after he saw a substance near Bauer that resembled methamphetamine, the affidavit said.

“In plain view in the driver’s seat, where Bauer was sitting, was multiple pieces of a glass-like substance identified as methamphetamine,” the deputy said.

During a probable cause search of the vehicle, the deputy located a small bag of heroin sticking out from under the center console by the gas pedal.

Perez, who lives at the 500 block of Marlin Circle in Barefoot Bay, was charged with drug trafficking after deputies located 14.6 grams of heroin in her vaginal cavity.

The bags of heroin that were located on Perez were identical to the bag situated where Bauer was sitting. The bags were packaged and tied in the same manner.

Bauer, who lives in the 900 block of Waterway Drive in Barefoot Bay, faces multiple charges including Criminal Attempt to Solicit and Possession With Intent to Sell Methamphetamine.