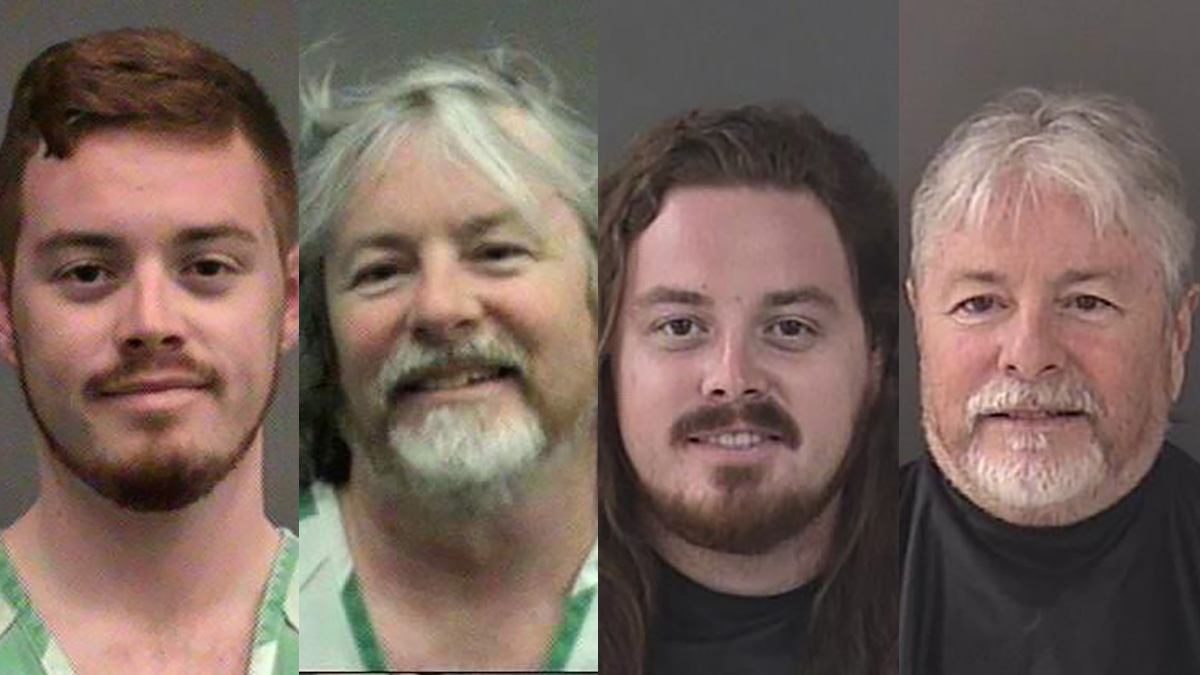 EDITORIAL/OPINION – The son of ousted City Councilman Damien Gilliams is running for public office. However, an out-of-town news organization misled a few people by stating it was the father running when it’s the son.

In this editorial and opinion piece, it’s a sure thing that some will call me biased. Still, we have a responsibility to inform our readers and the community about Gilliams and his father.

Whenever I have called his father out for the wrongful things he has done to this community, he and his son have retaliated by telling people Sebastian Daily only makes money on “negative clicks.” They tell people “they don’t know the whole story” to deny and then deflect. As if we’re in the wrong for reporting the truth about him or his father.

As local press, we have to report the good news and the bad news. We have to hold people accountable for their actions when they are running for public office. The community expects nothing less from us, and it’s our job.

Who is Damien Gilliams’ son?

Damien Lee Fey Gilliams, 28, still lives with mom and dad. He went to college and claimed to have made designs for State Farm, BMW, a local roofer, and the No Name Bar. With companies like that, that he allegedly worked for, you have to wonder why he’s still living with his parents and working at his father’s No Name Bar in Sebastian, Florida.

Gilliams helped his father during several of his campaigns. However, it took a decade for his father to win a seat on City Council. He won by about 80 votes.

The son also helped his father during the 2020 Sebastian recall, allegedly creating Facebook ads to make fun of Mayor Ed Dodd and members of the recall group. Many citizens thought the ads were childish and a modern version of campaign propaganda.

In the end, nearly 94% of voters removed his father from public office during a recall election. It all happened after his arrest for committing crimes of Perjury and several counts of violating the Sunshine Law. A jury found him guilty on all counts.

Gilliams and his father allegedly committed a campaign violation during the recall election with an in-kind donation for the Facebook ads the son created. The contribution was 50% more than the maximum allowed.

Gilliams has also helped his father with the Sebastian Property Owners Association (SPOA) as a member of the board of directors with people like Diana Bolton of Sebastian, Bob Bedea, Bob Stephens, and Ben Hocker. Unfortunately, SPOA has since collapsed to nearly nothing under their control.

No Name Bar in Sebastian

Gilliams and his father own and operate the No Name Bar in Sebastian. A few people from his bar allege that Gilliams and his father were livid when their establishment received a code violation on August 10, 2021, for all the patio chairs and picnic tables in the parking lot and on the grass down by the public roadway.

After receiving an issued violation, the son went to City Hall and picked up a packet to run for City Council.

It’s important to note that the City of Sebastian warned the No Name Bar late last year about the outdoor tables and chairs, but Gilliams and his father did nothing. All local establishments have complied and played by the rules except for them.

If you look up the “Sebastian Police Department” on Google search, you will see more antics from the father and son. Another example of what citizens have been dealing with in Sebastian.

In the Google pictures of the police department, the son tagged an image of his father holding a “Vote for Gilliams” campaign sign in the police department’s search listing. It’s easily done, but it just shows you an example of the behavior and the games they have played in this town.

The father has been arrested at least a half dozen times, and the son has been taken into custody with him at least twice.

In 2015, the two were asked to leave a bar in Gainesville at around 3:00 a.m. after creating a public disturbance. Once outside, they continued the disruption, and a large crowd notified the police. They were both arrested, charges were dropped against the son, but the father was convicted.

A couple of months ago, the two were arrested again on charges of filing a false police report against Sebastian Vice-Mayor Jim Hill. During his father’s criminal trial, the two accused Hill of battery on the son and trying to instigate a fight at the Indian River County courthouse. Hill was there to testify against the father. Upon reviewing the video surveillance, a warrant was issued for their arrest after the sheriff’s office did not see any physical confrontation. According to the Indian River County Sheriff’s Office, there was no evidence of any physical altercation on the videos.

The father and son still face charges for filing a false police report against Hill.

When people have questioned Gilliams about this incident or any other arrest involving him or his father, he’ll say, “they don’t know the whole story.” It’s a classic deflection.

Gilliams has recently said he’s done a lot for the community. Well, we can’t find anything good he has done for the people in Sebastian that doesn’t involve his father’s bar.

For example, we have seen Mayor Ed Dodd at local events. We’ve also seen Sebastian council members Fred Jones, Chris Nunn, Jim Hill, and Bob McPartlan going above and beyond at almost every community event. Jones and Nunn were seen at a couple of events recently picking up trash from the Lagoon and our roadways. But we have never seen Gilliams or his father out there helping. Never, not once.

We saw Gilliams participate in a small fishing tournament for a charity a couple of months ago, but we have never seen him out there getting his hands dirty.

Sebastian Daily has covered almost every single event in this town, but we never see Gilliams. So, honestly, what good has he done for the community?

Gilliams thinks he will make a great mayor!

Like father, like son! To become Mayor or Vice Mayor in Sebastian, the council has to nominate and vote.

A couple of years ago, I saw business cards that allegedly came from Gilliams’ father at the Clam Bake, pleading for people to contact the other city council members to nominate him as the new Sebastian Mayor.

When that didn’t work, approximately six months later, Gilliams’ father had an illegal meeting with two other council members (Charles Mauti and Pamela Parris) to nominate him as the new Mayor. He tried to steal the Mayor’s seat from Ed Dodd. They also wanted to fire city staff. Sebastian citizens called the move an illegal coup. Moreover, the people criticized them for doing something drastic during the COVID-19 pandemic when businesses shut down, and employees were at home on lockdown.

Gilliams recorded his crime, and he wore a ball cap during the Pledge of Allegiance. You can watch the illegal meeting here.

Gilliams then called a press conference and declared that he was the new Mayor of Sebastian as citizens showed up in anger and shouted, “Lock Him Up!” Diana Bolton, Bob Bedea, and Bob Stephens were all there to support him. Gilliams and his friends thought they hit the jackpot.

Gilliams’ father was convicted of Perjury and multiple counts of violating the Sunshine Law.

So now, the son wants to become Mayor. He recently posted a picture of himself on Facebook holding a City Council candidates packet and wrote in the caption, “I’m excited! I think I’d make a great mayor.”

You have to wonder why the father and son feel it’s crucial to have a seat on the City Council, let alone become the Mayor. In my opinion, there’s a hidden agenda, and based on everything the father has done, it does not serve the people.

Gilliams recently told another publication that he’s running for City Council because he’s tired of nothing being done for the environment. He also said the last straw was when all the manatees were dying, as if it’s the fault of the City of Sebastian. Unfortunately for Gilliams, this only shows his lack of education and knowledge about the Indian River Lagoon. It’s a state issue, not the city.

Anyone can research what the City of Sebastian has done to protect and promote Lagoon health. It’s on the city’s website, and residents can contact the city and get all the information they want. Sebastian Daily has also published articles about what the city has done, such as installing the new reefs near Crab E Bills. Several other projects are still going on.

Sebastian is one of the few cities to have a Best Management Practices program. They even have an Integrated Pest Management Plan to maintain the parks and other properties in addition to a Master Stormwater Plan and a Comprehensive Plan.

The City Manager has been meeting with legislators, including Rick Scott, to get additional grants to help the city with the Lagoon.

The City of Sebastian has been years ahead of any other municipality in Indian River County by leading the way to help the Lagoon, from treating its stormwater to using baffle boxes to capture pollutants from runoff.

The Sebastian side of the Lagoon also received the best health rating by the Marine Resource Council. The City of Sebastian will soon be featured in the Municipal Magazine for all its efforts to help the environment.

Seagrass beds in Sebastian have grown another 6 acres in the Lagoon. Sebastian also received a Growth Award from Tree City USA, presented by the Arbor Day Foundation for its dedication to planting native trees at its public parks.

The City of Sebastian has been a leader in converting residents from septic to sewer. Only recently has Indian River County decided to move some of their north county residents to sewer.

And until now, county residents in Roseland will have access to sewer because of the new Sebastian Public Works facility that’s being built near the airport. It’s a win for the environment and the St. Sebastian River.

Now, Gilliams said he was upset with all the manatees dying, but it’s not Sebastian’s fault. Those deaths from starvation did not occur in our part of the Lagoon. The manatees were dying in north Brevard County near Titusville.

So, the fact is, the City of Sebastian has already done more to help and protect the Lagoon than any other municipality in Indian River County.

Sebastian citizens care about the environment, but they are tired of misinformation from candidates saying the city isn’t doing enough.

In addition, Indian River County has several non-profits already picking up trash from the islands and helping with Lagoon health.

Why is he running?

Gilliams says he’s running for the environment, but many citizens think his candidacy is just mocking the election process after his father was ousted by the people.

Some people think it’s a test for the father to see how many people will still vote under Damien Gilliams.

Does Gilliams have enough experience to run city government? Remember, he still lives at home and works at his father’s bar. He has never volunteered or been on any boards with the City of Sebastian. The only board he’s been on is SPOA, in which his father was the President.

In the coming weeks, if Gilliams doesn’t drop out of the City Council race, you will witness firsthand the campaign tactics the father and son play. Based on previous campaigns, they are self-serving with misinformation, and they love to spin the facts.

There are better candidates, and voters need to know that the apple doesn’t fall far from the tree regarding politics, arrests, and antics.