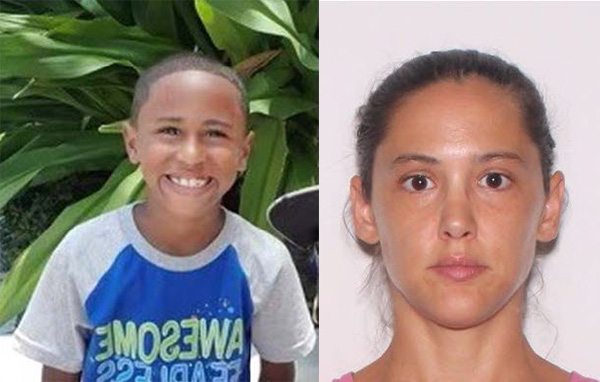 The Indian River County Sheriff’s Office is searching for an 8-year-old boy and his mother who was supposed to relinquish the child on Jan. 25 to his father.

The boy is Dayton Breaud, 8, who stands 4 ½ feet tall and weighs between 60 and 75 pounds. He has brown eyes and black hair.

He is believed to be with his mother, Tabitha Breaud, 37. She was ordered to surrender parental rights to Dayton’s father and failed to do so. Breaud now has an active felony warrant issued for her arrest on a charge of interfering with custody of a parent/guardian.

Authorities believe she might be driving one of her boyfriend’s vehicles. The possible vehicles are a gray 2007 Honda 4-door with Florida tag 38AHHL and a white 1998 Subaru station wagon with Florida tag BPTD32.

Anyone with information regarding the Breauds’ whereabouts is encouraged to call Det. Daugherty at (772) 978-6163 or remain anonymous and eligible for a cash reward by calling Treasure Coast Crime Stoppers at (800) 273-8477.

Barefoot by the Lake – Music, Art, and Food Festival

Barefoot by the Lake - Music, Art, and Food Festival