Editorial: Damien Gilliams now wants to be a watchdog for Sebastian 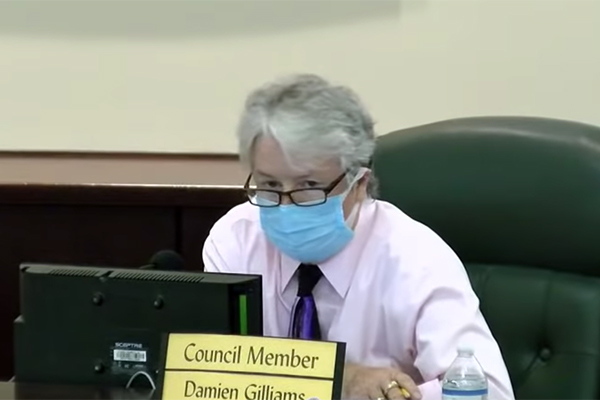 Sebastian Councilman Damien Gilliams wants to be a watchdog for Sebastian, to save the city from wasteful spending.

However, Gilliams and the City of Sebastian are named as defendants in a lawsuit over Sunshine Law violations. The litigation involving this and other cases will be expensive, and the taxpayers might have to foot the bill. Also, Gilliams and two other city council members are under investigation by the State Attorney’s Office.

A law firm is suing Council members Damien Gilliams, Pamela Parris, Charles Mauti, and the City of Sebastian for breaking the Sunshine Laws. The legal team, operated by government advocate Michael Barfield, has a 90% success rate against public officials who violate the Sunshine Law, and they go after the cities where the violations occurred.

How much will the three City Council members cost Sebastian?

In a recent case, Barfield won a $1.5 million settlement against the City of Venice after they could not provide a public record request for city cellphone text messages.

We already know that Damien Gilliams is unable to provide any public record requests for his city-issued phone before mid-February 2020 because he reset his phone, causing all public records to be deleted. This act is also a Sunshine Law violation.

“It looked like it was hacked. Could not open it,” Gilliams told Sebastian Daily.

Many residents in Sebastian want to know what Gilliams was hiding to reset his phone. The city’s MIS department has procedures to handle phones and devices with workers and elected officials. Gilliams took it upon himself to conduct a factory reset on his phone.

The State Attorney’s Office is still investigating council members Damien Gilliams, Pamela Parris, and Charles Mauti for the alleged “illegal” meeting on April 22, 2020, that took place at City Hall. Citizens believe it was nothing more than a “coup” to take over the City of Sebastian. The cost to handle this litigation could again cost taxpayers.

Gilliams wants to be a watchdog to look for overspending, especially if it involves the prior council, and now he wants to rehash the Sugar Sand controversy during the next meeting.

The Sugar Sand is just a diversion from all the other legal spending going on with the three city council members. Local and state authorities already investigated it. There was no wrongdoing with the Sugar Sand.

“There is insufficient evidence in order to open a criminal investigation into the allegations that Gilliams has made against former and current Sebastian City Managers and Mayor Al Minner, Joe Griffith, and Jim Hill,” the FDLE said in the report.

According to Gilliams, Fisher and Sons received a “kickback” because they “contributed to Joe Giffith’s City Manager campaign.” Gilliams alleges that the land was excavated in “secret,” so residents were not aware of the deal.

“Yes it starts with stopping the fleecing of monies out of the City of Sebastian. No accountability on Surplus property being removed from the new city cemetery to political friends. Inflated contracts for 8 million-dollar garages at the city airport to contractor friends from out of town when our local contractors need the work. This is what occurs when Mayor Ed Dodd and City Manager Paul Carlisle hijacked the community through that illegal emergency declaration. Oh, and by the way, if you look at the April 22nd meeting agenda that Dodd illegally canceled, I had on the agenda under my matters to help the small businesses open up. Mash monkey would not have to wait for over a month to open up,” Gilliams told Sebastian Daiily.

Most of the quote is distorted, self-serving, and an example of how desperately Gilliams wants to be a hero. Gilliams’ agenda had nothing to do with Mash Monkeys, and he can’t make a statement without attacking the mayor or the city manager.

Also, Gilliams said that if I did not put the whole quote in, as seen above, not to contact him anymore for quotes.

“There you go Andy. If you don’t put the whole quote in, do not call back ever again for any more quotes,” Gilliams said.

On Wednesday, Gilliams will again bring up the Sugar Sand conspiracy, which could open him up for new lawsuits after. Additionally, he has named Fischer & Sons in his accusations, and they are not happy either.

We already know that Gilliams will do whatever he wants to do. When something doesn’t go his way, Gilliams will repeat it and push for it until people agree.

This week, several citizens wrote to Governor Ron DeSantis, asking him to suspend Damien Gilliams, Pamela Parris, and Charles Mauti until the criminal investigation is complete with the State Attorney’s Office.

The next City Council meeting is Wednesday at 6:00 p.m. at City Hall.